Installing solar panels is an easy way to lower your carbon footprint and cut electricity bills. However, our recent research has shown that there are many incentives to get these removed early, adding to Australia’s massive waste problem.

Researchers predict that Australia will accumulate 1 million tons of solar panel waste by 2047 – the same weight as 19 Sydney Harbor Bridges.

That number is likely to be higher, however, as we’ve found that people often choose to remove panels after as little as 10 to 12 years. This is much earlier than the estimated end-of-life age of 30 (and possibly older).

Unfortunately, recycling is only a small part of the solution. Why is this happening and what can we do about it?

The Australians have followed the call for more renewable energies. The installed capacity of panels across Australia has increased dramatically from 25.3 megawatts in 2007 to 77,078 megawatts in 2017. Likewise, the capacity of the rooftop solar market almost doubled between 2014 and 2018.

Australia is committed to the UN Sustainable Development Goal of using fewer resources. And this requires that we use products (like solar panels) efficiently and with less waste. However, Australia’s 2020 Progress Update shows that our per capita footprint is growing. In fact, at 70% above the OECD average, it is one of the highest in the world.

Read more: A waste crisis looms due to the Australian solar energy boom

To reduce our growing material footprint and keep e-waste out of landfills, we need to ensure that solar panels are sustainable in life and death.

It is believed that the main reason people remove solar panels is due to technical errors, such as: B. if they have expired after 30 years or break due to extreme weather or during transport. Failure to generate electricity, however, does not explain why many are thrown away prematurely.

People often choose to remove panels after only 10 to 12 years of use.
AP Photo / Ben Margot

We have found that if only a few panels are damaged, a whole system of panels is removed as the new panels must have similar electrical properties to the old ones.

If the panels are still under warranty, the manufacturer often pays to replace the entire set, even if only a few are faulty. This means that countertops next to the defective ones will be removed and become waste prematurely.

Solar panels have also become a commodity. Many of us throw away old phones and cars when newer technology becomes available and solar panels receive the same treatment. After the investment in solar panels has recovered from reduced electricity bills, some people want to get newer, more efficient models with a new warranty.

Read more: Indonesia May Make $ 14 Billion From Old Cell Phones and Other Electronic Waste By 2040

Our research also suggests that government incentives to introduce more solar panels have resulted in consumers replacing their entire solar array. This is because previous discounts didn’t cover replacing just one or a few panels.

After all, the lifespan of solar inverters is typically 10 to 12 years, which is much shorter than the 30 year lifespan of the modules themselves. Some people take this as an opportunity to install a new set of solar panels when they change their inverters.

Why can’t we just recycle them?

There is currently little research into what we can do with panels when they are removed for reasons other than technical errors.

Researchers often suggest recycling as the preferred option for removed panels. However, sending the growing number of countertops to recycling plants is a tremendous waste of resources and adds to the burden on sheet recycling, which is still in its infancy.

Read more: A type of “biodegradable” plastic will soon be phased out in Australia. This is a great benefit for the environment

Waste management is the responsibility of the states and regions and aligns their waste strategies with the national waste policy of the federal government.

At the national level, however, there is still no directive on the disposal of solar modules. This means that there is a patchwork of guidelines in the states and territories for how to dispose of this waste. 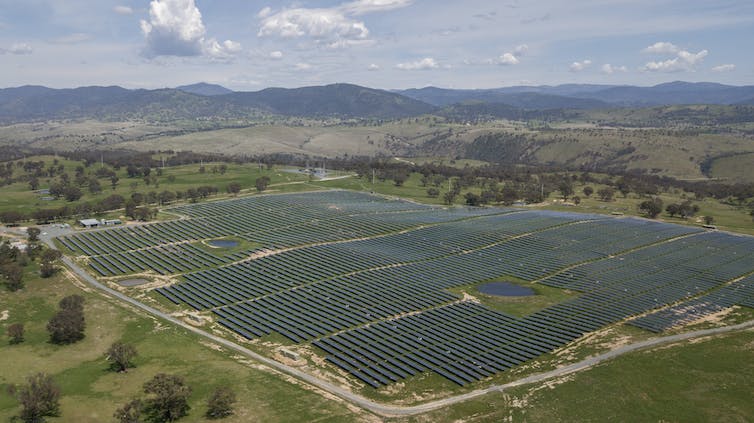 For example, Victoria has identified solar panels as the fastest growing waste stream in the entire state’s e-waste flow, and the state government has banned them from landfills.

However, such measures would not work for the Northern Territory due to the lack of processing facilities and the distance to recycling centers in South Australia, which are at least 1,500 kilometers away. With plenty of open land, they are more likely to be dumped illegally.

What do we do?

By proposing recycling as the preferred option for waste management, we risk excluding other important options in the waste management hierarchy, e.g. B. the waste reduction primarily through the production of long-life solar modules that extend their service life.

The federal government has also touted “product stewardship” as a possible solution. Here, those involved in the manufacture, sale, use and disposal of products are responsible for reducing their environmental impact.

However, this model would not serve regional and remote areas effectively because collecting and transporting goods from remote locations comes with very high financial and environmental costs.

It’s worth noting that some panels go through some sort of “second life”. There is a unique demand for used panels from people who cannot afford new systems, people who want to live off the grid, small organizations looking to cut energy costs, and mobile home and caravan owners.

With a number of massive solar farms across Northern Australia, it is more important than ever to develop new strategies for managing remote solar panels with clear guidelines and creative solutions.

The authors thank Robin Gregory of Regional Development Australia, Northern Territory, for contributing to this article.