Here is some news from the press. Researchers have found a secret ingredient for making solar panels that absorb solar energy more efficiently. Depending on what you like to eat, there’s a good chance you can find it at home. Capsaicin, the chemical that gives chili peppers their flavorful tinge, also improves perovskite solar cells – the devices that make up solar panels.

By adding capsaicin, the grains that make up the active material of the solar cell are expanded, allowing electricity to be transported more effectively. More importantly, the material goes from a deficit of electrons to an excess, changing the way the cell works and allowing more sunlight to be converted into electricity. Essentially, the addition of capsaicin adds electrons. This can be the same effect you get on your tongue after a particularly flavorful biryani.

The cells laced with capsaicin are among the most efficient that have been reported. Instead of being a gimmick to make headlines, adding this chemical from chili peppers can actually be a way to improve solar cell performance.

But why would you even think about adding chili peppers to a solar panel? Unfortunately, the researchers didn’t share their thought process. But I have form in this area too.

A moment of the lightbulb

In 2014, I published a paper showing how a compound called magnesium chloride can dramatically reduce the cost of solar energy, albeit in a different type of solar cell. Haven’t heard of magnesium chloride yet? If you’re a vegan, you’ve probably consumed it before.

It is a salt that is not too dissimilar to table salt (sodium chloride) and can be obtained from seawater. It has many uses, but one of the most popular is Japanese cuisine where it is known as nigari and is used as a coagulant to thicken tofu. My results resulted in media coverage of “Tofu Solar” which was fun, and I was referred to as the Tofu Boy (less fun) at academic conferences.

Does this mean that food chemicals can be transferred particularly well to solar cell research? Not really. Chance has more to do with the intersection between food and chemistry and the “what if” approach that guides many materials scientists.

Read more: How a new solar and lighting technology could drive a transformation of renewable energies

You’d think that most solar cell research is done by physicists. This is partly true – after all, I am one myself – but the research approach has little to do with the work of particle physicists at the Large Hadron Collider or the cosmological research of Stephen Hawking. These areas generally revolve around extensive calculations and theoretical work. In other words, spending a lot of time staring at blackboards.

Solar cell research is really a matter of materials science, which is somewhere between physics and chemistry. The development of new solar cell technologies or processes is very labor intensive, and the typical approach is to spend a lot of time testing the performance of a large number of comparable but slightly modified cell designs. Solar cells are made up of stacked layers of different materials, and it is difficult to predict what will happen to the performance of the entire structure by changing any component.

If I add something to Layer A and it changes, Layers B, C, and D above will likely change too. If I change Layer C, then I’ll also have to change how I did A or B and then what with D. happens? You can probably get a sense of how difficult this would be to predict, and this piques the curiosity behind much of the innovation in this area. 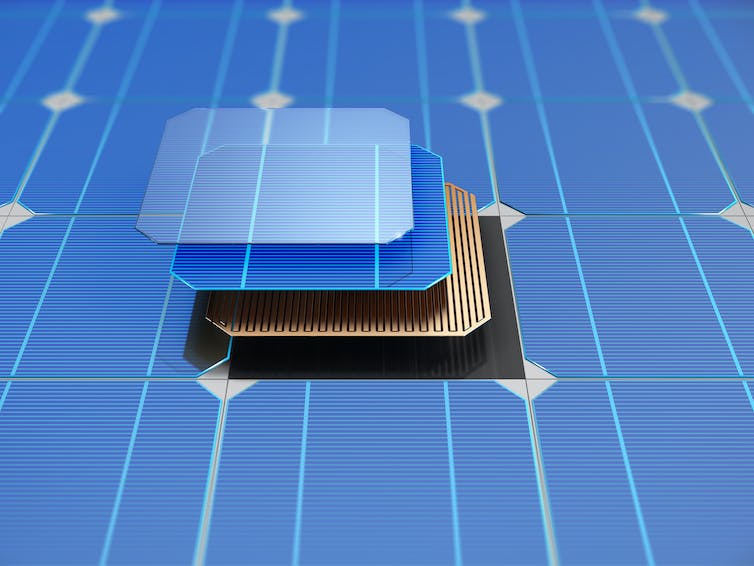 In the case of solar innovations, one often has to experiment with the complex composition of cells.
Iaremenko Sergii / Shutterstock

Think of solar panels like cake. To find out what happens when you add a novel ingredient, it’s far more reliable to bake it and then try the final preparation than predicting what it will look like and taste like before you bake it.

Ultimately, like solar panels, the food we eat is a mixture of compounds. While we know capsaicin from chili, it is actually just an organic compound called C₁₈H₂₇NO₃, which happens to have special properties that make it suitable for processing solar cells and for flavoring a fajita.

For my part, I had developed the method of using magnesium chloride and only found out later when I came to write the paper used in tofu. Unfortunately, I wasn’t inspired by the vegan course. So these approaches aren’t as weird and crazy as they sound when you first read about them. There is usually some initial logic based on the inherent chemistry of these compounds, and these flights of scientific imagination often lead to interesting breakthroughs.

So if in the near future you read an article about solar cells that was immeasurably improved by adding nutmeg or the like, trust that it was because of an informed curiosity about the likely effect, and not because of boredom and a looming best-before date.