Solar panels floating on the lakes formed by Africa’s hydroelectric dams could be an important new source of energy, according to a new study.

If these panels only covered 1% of the reservoirs, that alone could double Africa’s hydropower capacity and increase electricity generation from dams by 50%.

Dams are the largest source of renewable energy on a continent where millions of people still do not have access to electricity. However, their future potential could be affected by climate change.

In a new article published in Renewable Energy, researchers highlighted the possibility of using floating solar panels installed on lakes to increase the generating capacity of existing dams.

In view of the continent between the “climate crisis and widespread energy poverty”, a regional expert told Carbon Brief that floating solar energy could be a valuable tool to help African nations expand their energy infrastructure sustainably.

Hydropower accounts for 17% of the electricity generated in Africa and more than 90% in some countries, including Ethiopia, Mozambique and Zambia.

Dr. Samuel Gyamfi of the University of Energy and Natural Resources in Ghana, who was not involved in the new study, told Carbon Brief that African nations still built far less than other parts of the world:

“This is largely due to financial constraints. Africa has around 90% of its hydropower resources that have yet to be developed to generate electricity.”

Currently, less than half of the population of sub-Saharan Africa has access to electricity. With more than 50 new dams currently being built, this technology is often touted as a renewable solution to Africa’s energy needs.

With temperatures rising around the world, leading to rainfall and drought, it is expected that existing African plants will generate less electricity in the future. In addition, the dams built were often associated with social, ecological and political problems.

The new paper suggests floating solar panels as a solution that increases hydropower capacity using Africa’s “vast solar resources”. Panels can be mounted on floating structures and connected to the existing electricity infrastructure.

The authors * – a team from the Joint Research Center of the European Commission – tell Carbon Brief:

“Floating photovoltaics could be a potential alternative to expanding hydropower in certain areas, particularly in water-scarce regions where periods of drought have a serious impact on hydropower generation.”

At the same time, they find that hydropower could compensate for the interruption in solar energy in these hybrid systems during the rainy season.

The researchers used a combination of satellite imagery and data from hydropower storage and solar radiation to estimate the potential of the floating sun in Africa’s 146 largest hydropower plants as of 2016.

In a maximum scenario where 100% of each reservoir was covered with solar panels, capacity would increase 100-fold, adding 2,922 gigawatts (GW) of solar to the existing 28 GW of hydropower.

This would mean a 50-fold increase in electricity generation compared to the current hydropower output from 106 terawatt hours (TWh) to 5,293 TWh. This dwarfs the total electricity demand across Africa, which is only around 700 TWh.

While it is clearly “not feasible” to panel every reservoir, the authors note that the gains were substantial even in cases with much less coverage.

With just 1% coverage, the installed capacity of existing hydropower plants could more than double and increase from 28 GW to 58 GW.

This would mean increasing the total electricity output of the hydropower and solar hybrid system to 159 TWh, which corresponds to an increase of 50% compared to hydropower alone.

The paper also contains a scenario in which the installed solar energy is precisely matched to the hydropower capacity and enables the dam connection to be fully connected to the grid.

This resulted in 0.9% coverage but only for 108 reservoirs as the remaining 38 required greater than 100% coverage to achieve the same hydropower capacity. These reservoirs are shown in the map below, with the size of the circles indicating the amount of solar energy.

Location of the reservoir, floating solar radiation and floating annual solar power production for 108 of the analyzed reservoirs.

“Only solar on a boat”

According to a 2018 World Bank report, floating solar energy has “still grown exponentially,” although it is still in the early stages of development.

Some African nations have taken the first steps towards this new technology, but they are way behind big players like China. A 2019 report found that Africa was using 64 kW of floating solar power, while Asia was using 813,788 kW.

Jenny Chase, a solar analyst at BloombergNEF (BNEF) who was not involved in the new study, told Carbon Brief: “Sticking solar panels on hydroelectric plants should be an obvious win.”

In general, solar power will grow significantly in the region, taking advantage of Africa’s plentiful solar resources and falling prices. “The continent really only needed it to get cheap,” says Chase.

An additional benefit of floating solar panels on hydropower storage systems is that they can reduce water loss during periods of drought by creating a protective shield that blocks evaporating moisture.

This in turn could further improve the performance of the dams. The paper found that using floating panels that completely covered 1% of the water surface would increase hydropower output by 0.17% due to water savings.

“This is important for a continent that has to appreciate every last drop as global warming increases,” says Adow. 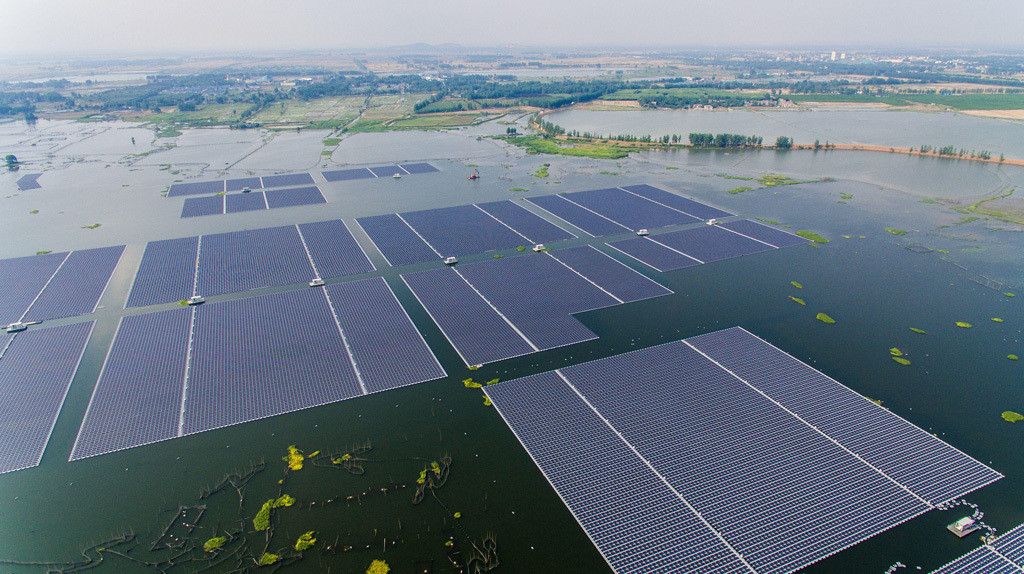 The world’s largest floating solar energy plan in China has an output of 40 megawatts.

Experts tell Carbon Brief that while the new paper paints an interesting picture, there are problems with the floating sun in Africa.

“The technology is excellent, but quite expensive,” says Dr. Mmantsae Moche Diale, solar energy researcher at the University of Pretoria.

The study finds evidence from the EU that floating solar energy can cost around 20-25% more than the conventional variety.

The authors tell Carbon Brief, however, that saving on grid connection costs can make floating solar energy “more economical”, since a power grid infrastructure is already in place in hydropower plants.

Downplaying the additional cost, Chase tells Carbon Brief that “it’s a bit more expensive than floor mount, but not by much,” adding:

Nonetheless, Adow says that in order to make the scenarios outlined in this paper a reality, African governments from richer countries need targeted financial support:

“This is why developing countries are talking about the importance of ‘technology transfer’ at UN climate summits. It has to be high on the agenda when the countries meet at COP26 in Glasgow this year.”

“Africa finds itself between a climate crisis and widespread energy poverty. Managers need to think creatively and be supported, ”he adds.

The authors of the new study note that given the relatively new technology of the floating sun, there are many unknowns such as: B. the impact on water quality and engineering challenges including the effects of bird pollution and corrosion.

Gyamfi said these issues will vary widely from country to country, and it is noted that further research is needed to determine how best to scale floating solar energy in the area.

The authors say the nations that benefit most from floating sun are both North African and South African countries due to their relatively low hydroelectric capacity.

Almost all of South Africa’s electricity is currently supplied with coal, while countries such as Algeria and Libya are heavily dependent on natural gas.