LANSING – A new report on combining solar energy and farming practices said the practice could take root in Michigan, increase productivity, and provide much-needed sanctuary for bees and other pollinators.

The report from The Counter, a newsroom with extensive coverage of food in America, discusses the increasing prevalence of “agrivoltaics,” the practice of growing plants under solar panels.

Sheep graze in the shade of solar panels in Lenawee County, an example of agrivoltaics.

The process appears to be a win-win for crops like tomatoes and jalapenos, which respond well to lower lighting, the report said.

This is because the crops’ natural photosynthesis can give the solar panels a slight cooling effect, allowing them to work 1-3% more efficiently.

Similarly, the reduced direct light on some plants is extremely beneficial, it said. For example, tomatoes grown under solar panels doubled the productivity and saved 65% more water.

The term agrivoltaic also includes the use of solar systems to support animal husbandry, with solar panels often used to provide shade for the animals.

Charles Gould is a bioenergy educator at Michigan State University Extension in West Olive. He believes that agrivoltaics could be the future of renewable energies.

“I think this is the future. Solar needs land, and often the best for a solar project is land to grow crops, ”said Gould.

“If we are to take land out of production, we have to maximize its value, and the way we can do that is by growing crops or raising cattle under these solar panels,” said Gould. 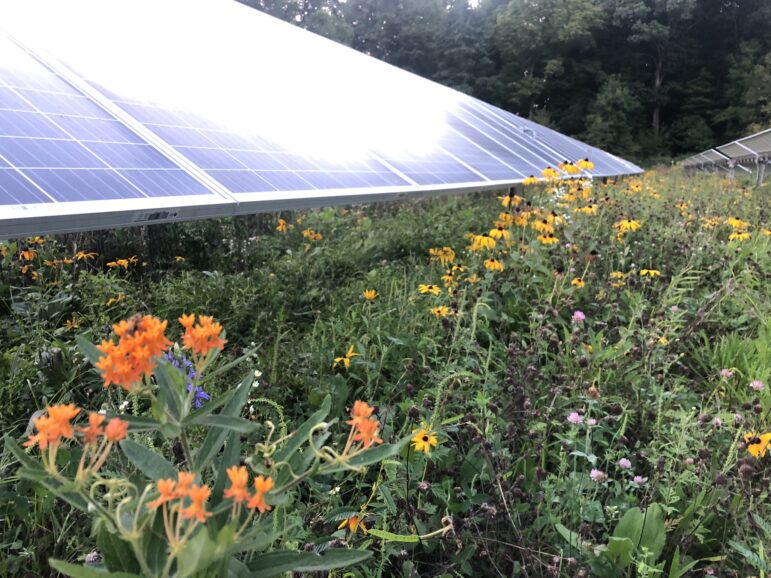 Gould said there is a farm in Michigan that uses solar panels to provide shade for sheep when they graze.

Sharlissa Moore, professor at MSU who specializes in social and political issues related to renewable energies, also sees future potential in the dual use of solar systems.

“The point is not that it happens in the next few years. It will be so many years before solar gets cheaper and it actually becomes feasible to do it,” she said.

With agrivoltaics, solar collectors often have to be raised higher than normal.

Moore said the extra height of the solar panels can sometimes make the benefits of agrivoltaics economically unrealistic.

“We don’t have big numbers for this, but (increasing the solar panels) will add about 9 or 10% to the total cost, which is very high for renewables, where margins are low,” she said.

Moore added that the estimate can change widely depending on the scale.

Gould says the cost could be worth it in the long run and may be necessary to get public support. 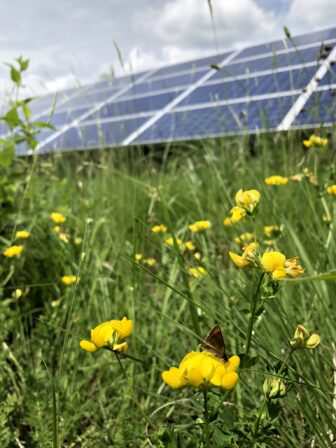 An established habitat for pollinators provides space for a butterfly

“I think we will see that there are people who oppose solar projects because they are being moved onto land that is currently in crop production,” he said.

“I think we’re going to see the compromise – the compromise here is that when this shelving system is increased, people like zoning boards and the general public will become more accessible to solar projects to allow them to comfortably graze under them,” he said.

Gould said there would be a compromise because the general public wants the land to remain in agriculture, which means increased costs for increasing solar panels.

Both Gould and Moore see an additional promise in pollinator habitats – the practice of converting solar systems into sustainable habitats for pollinating insects.

Gould said pollinators are “really, very, very critical to agriculture because we are losing pollinating insects.”

And Moore said: “The habitat of the pollinators is much more feasible than that of the agrivoltaics. I anticipate this will happen in the near future, especially because part of it is being hired by the Michigan government to create a habitat for pollinators on these solar sites. “

This tech repels dust from solar panels, saving up to 98% of energy